The treasures of Friuli officially recognized

This is a journey into the Most Beautiful Villages of Italy in Friuli Venezia Giulia.

Clauiano is an ancient medieval village of 500 inhabitants in the municipality of Trivignano Udinese. Rissal to Roman times and it is assumed that the name derives from the Roman surname Claudius. It is a village of pièris and clàps, stones and pebbles, which cover the walls and facades of historic buildings, rural houses and the open spaces of their internal courtyards, to be visited by walking. 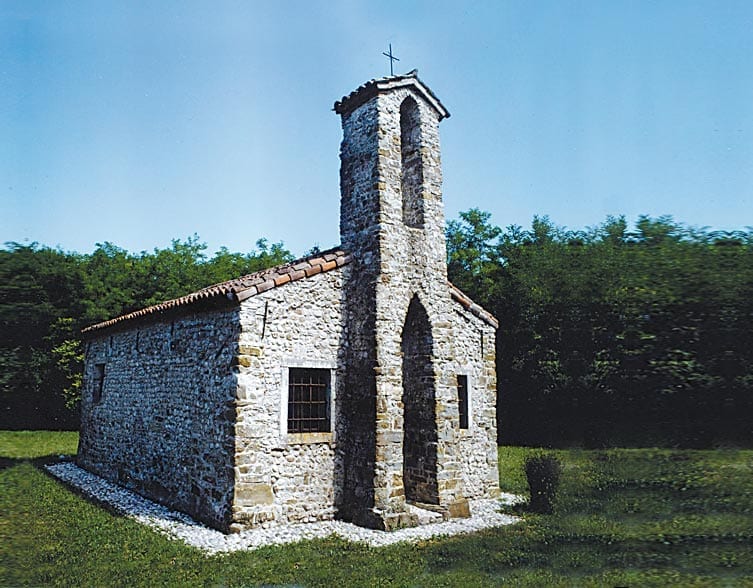 It is the small jewel of Western Friuli (inhabited since Roman times), rich in history and monuments: a castle, a medieval village, the ancient parish church and the oldest Marian sanctuary in the diocese. It was a land of poetic inspiration for great writers such as Ippolito Nievo and PierPaolo Pasolini. Today it is the seat of the “Ippolito Nievo” literary park. Cordovado is an area of ​​water, canals, springs and artificial lakes thanks to the old quarries and has as many as 23 public fountains (some of which are old). 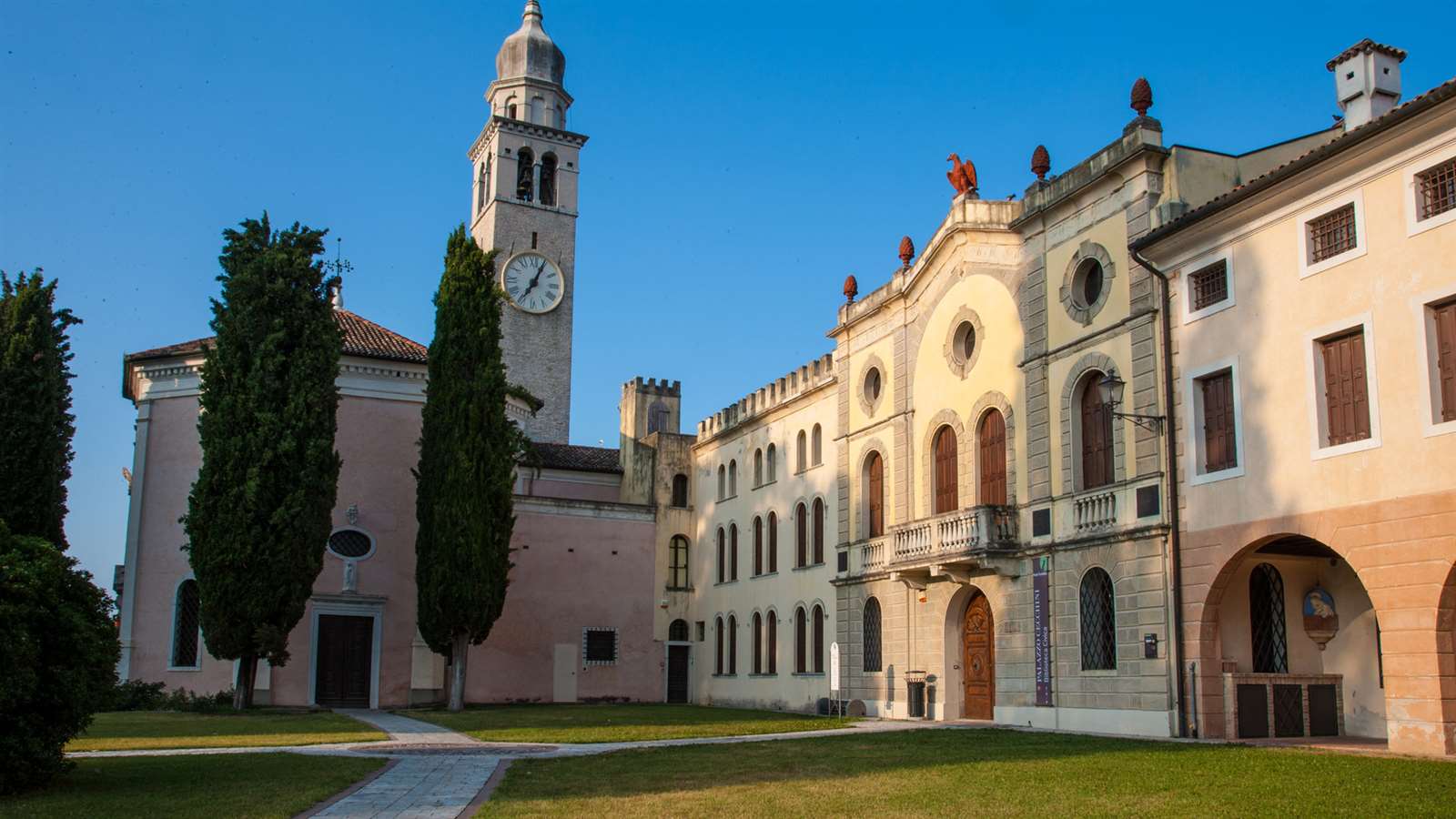 Just over six thousand inhabitants and two castles. It happens in Fagagna, where history has made five ancient and distinct villages live together until they merge into a single reality. Among the tourist attractions there is also the “Fagagna cheese” and the storks of the Quadris Oasis. 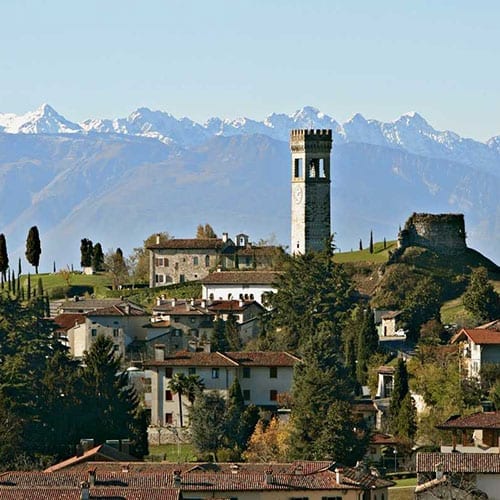 It is a refined baroque living room, protected by the walls erected in 1479 by the Venetians against the Turkish assaults. An elegant center, on which severe palaces open, softened by baroque traces, witnesses of four centuries of Habsburg influence. Gradisca means art and culture, but it also means tradition in hospitality and food and wine culture: a real treasure to be discovered. 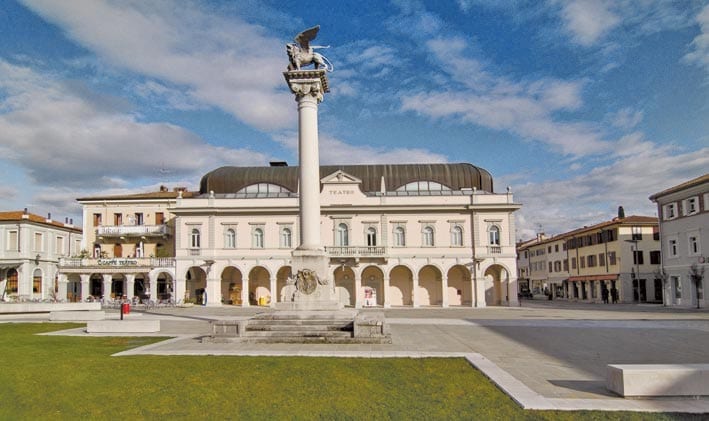 Palmanova is a city - fortress built by the Republic of Venice and represents one of the most successful and unique masterpieces of Venetian military architecture, with its star-shaped plan formed by the two defensive orders of bulwarks and ravelins and the third, the most external, with the lunettes. Also worth visiting is Piazza Grande, a vast parade ground located in the center of the fortress. 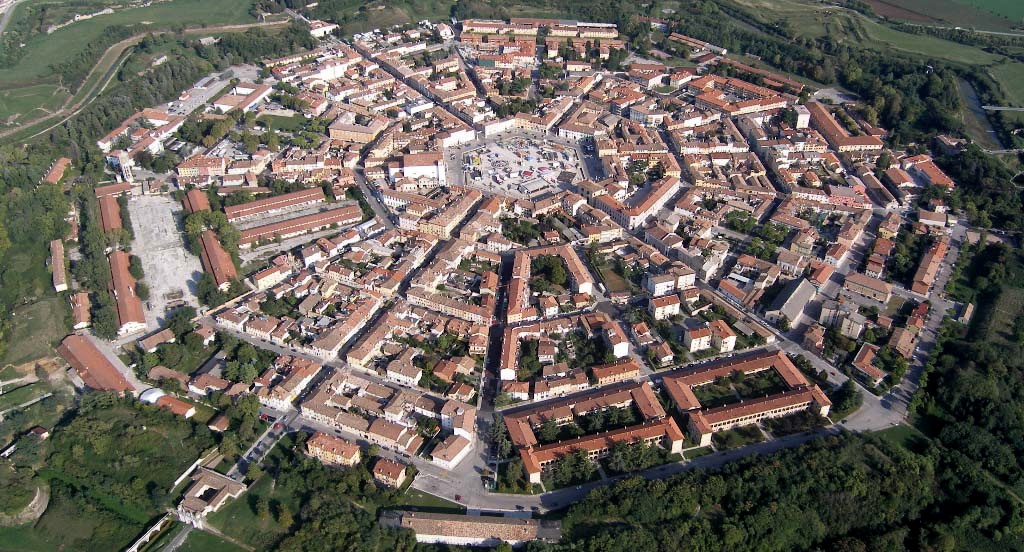 An open-air museum in the heart of Val Colvera whose "magical power" lies in the enchanting effect of the raw-cut stones and wooden balconies. "Prafabrorum", the "blacksmiths meadow", every year during the Christmas period is transformed into a fairy-tale nativity scene in the open air. Taking a tour of the village, set among wooden balconies, stone houses and flower boxes, on the windowsills and in the arches or in any hidden and suggestive corner, you can see enchanting cribs made by young and expert hands of artists or enthusiasts. 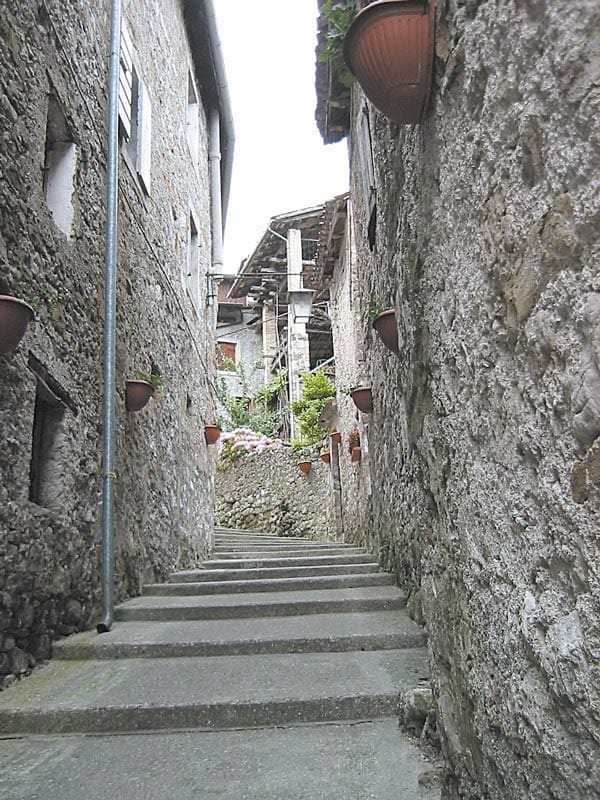 It offers enchanting glimpses of land and water: on the one hand the historical testimonies of which the protagonists are the ruins of the medieval castle, and on the other hand the natural context that is characterized by the abundance of water. Here are the sources of Gorgazzo and Livenza with crystal waters with surprising shades of blue. 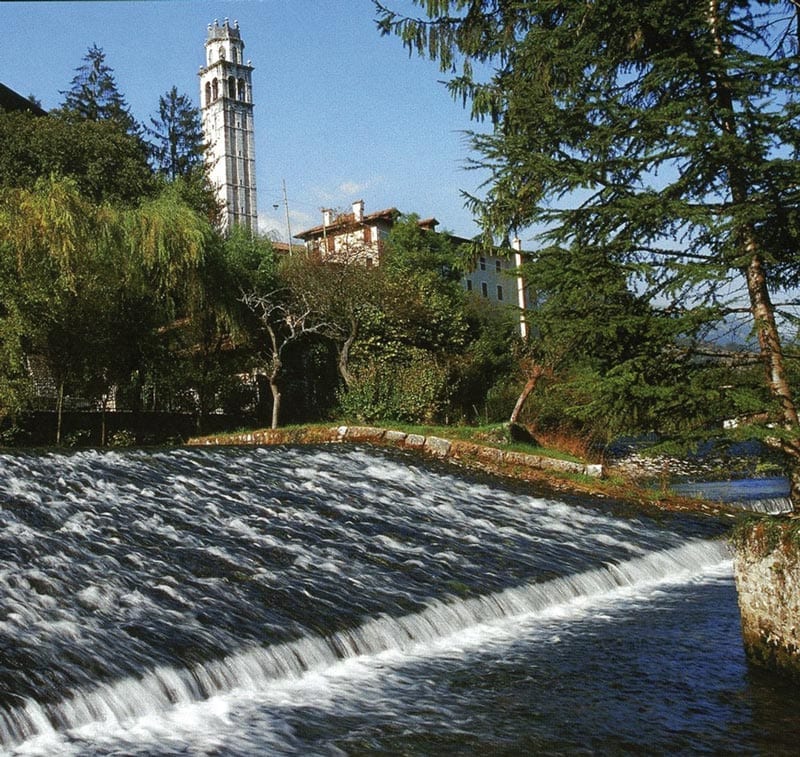 It is a wonderful tourist resort, very popular both in summer and in winter in the heart of the Friulian Dolomites. The environment surrounding Sappada is still uncontaminated and this is positively reflected in the variety of animal and plant species that live in the valley. 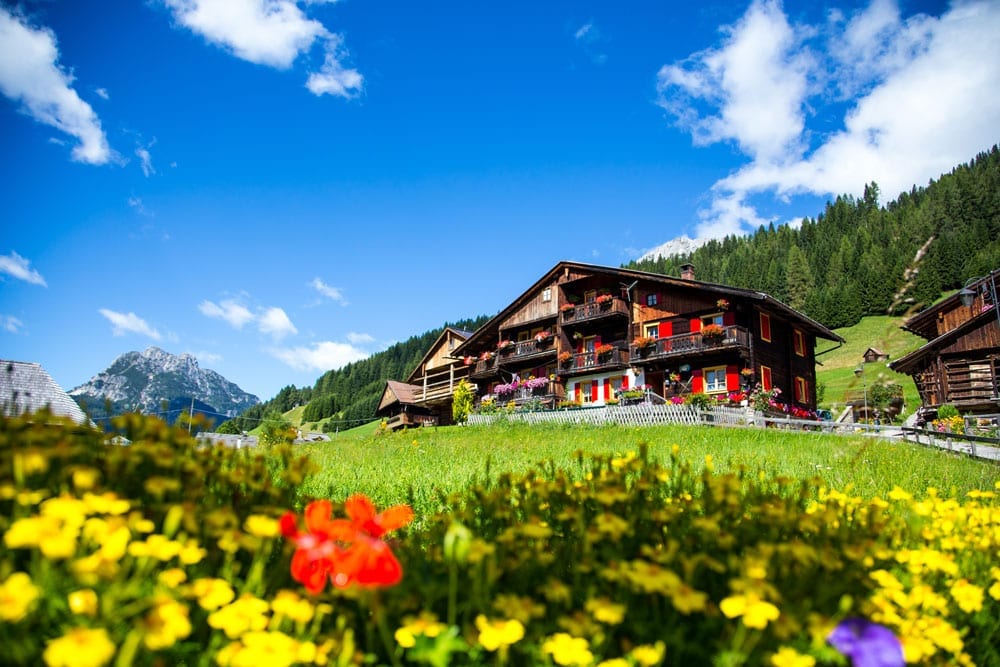 Cultivated fields along the ancient Roman road announce a land rich in greenery and water: the land of the abbots. A thousand-year-old Benedictine abbey, in the green of the Friuli plain, around which the village was born, in Lombard times. Do not miss the Urn of Sant'Anastasia which represents one of the most significant artifacts of the early medieval artistic culture.

It is a rare example of an ancient medieval village, extremely well preserved, and of rare charm, belonging to the municipality of Cervignano. Of the old Castle of the two Towers, the Castello di Sotto and the Castello di Sopra have been preserved, which are part of a single mighty fortified whole.

A divided but united village: the two nuclei, that of the farms of Toppo and the hamlet of Pino, are divided by the Gleria stream. However, they are united in history and by the Castle of Toppo, which still watch over the plain and the village that serves as a witness. In this place of a surly beauty you can appreciate typical food and wine products including the salty cheese of Val Cosa. 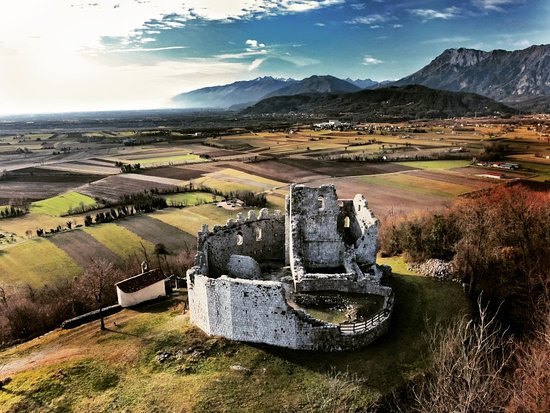 The Land of the Wolf, the village of Valvasone keeps intact its medieval aspect made up of graceful streets and ancient houses with arcades. The castle houses late Gothic and Renaissance frescoes and a precious 18th century wooden theater. The cathedral houses a splendid 16th century Venetian organ. The cloister of the former Convent of the Servites built in the 1400s is also fascinating. But Valvasone, today Borgo delle Spose, knows how to do better: every year in September the historical re-enactment offers everyone a true medieval festival. 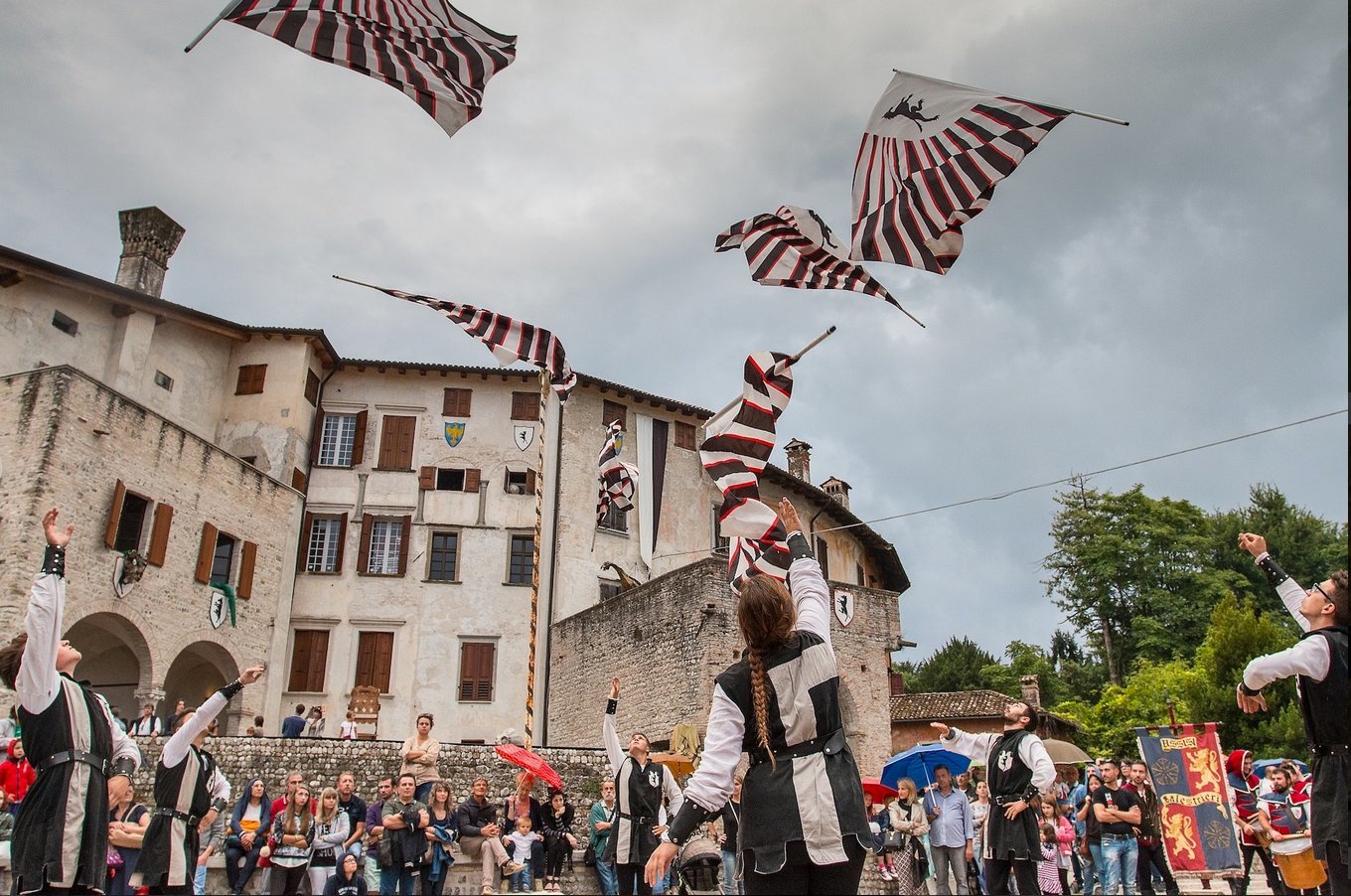 A village within the walls, completely destroyed by the 1976 earthquakes and rebuilt stone by stone, as it was and where it was, by the will and sacrifice of its community. From the time of the Celts (500 BC), Venzone owes its fortune to its position of forced passage towards the north. Subsequently the Romans made it their statio along the route of the Via Julia Augusta. In the thirteenth century it was fortified with a double wall, preceded by a deep moat. 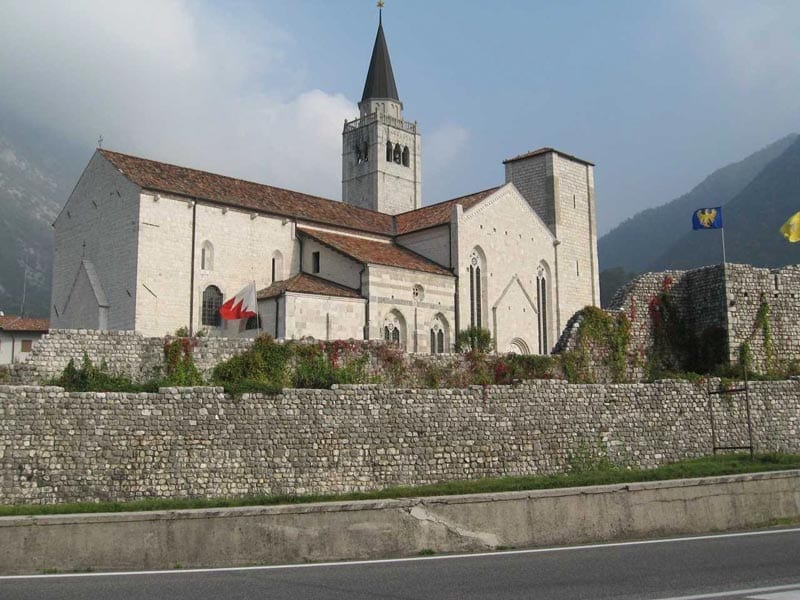